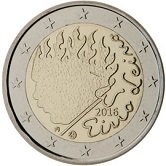 Details relating to the Finnish Commemorative of 2016.

This coin commemorates the 90th anniversary of the death of Eino Leino.

Eino Leino was a famous Finnish journalist and poet. Leino is held to be the first and most important shaper of national romanticism in Finnish literature.

The rather imaginative motif of the coin shows a profile of Leino formed from a flame and a poker under the profile pointing upwards and towards the right.

Around the edge of the inner circle is Leino’s signature – from six to one o’clock.

The year of issue 2016 appears a little in from five o’clock and finally we see the country designation and the mint mark at seven o’clock, to the left and right of the poker handle.