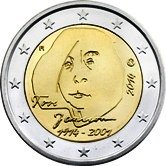 Details relating to the Finnish Commemorative of 2014.

This coin commemorates the 100th anniversary of the birth of the Finnish/Swedish writer and illustrator, Tove Jannson.

She was best known for her creation of the fantasy world “Mumins”.

The motif is a stylized representation of Jannson with her signature and at the bottom of the inner circle her dates of birth and death (1914-2001).

The year of issue is shown vertically at three o’clock, the mint mark is at two o’clock and the designation of the issuing country is at ten o’clock.