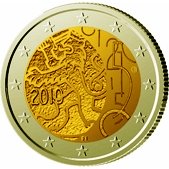 Details relating to the Finnish Commemorative of 2010

The coin commemorates 150th anniversary of the usage by Finland of its own currency. This was made possible thanks to a decree issued by Tsar Alexander II of Russia in 1860.

In the centre left of the inner circle is a stylized presentation of a lion that appears on the Finnish coat of arms. On the right are a series of numbers that symbolize various coin values.

On the outside of the inner circle between two and three o’clock is the mint mark and the nationality “FI” is shown at very bottom – six o’clock.

One could question how accurate this is as since 1999, Finland has the Euro as a currency which is not actually its own currencý but rather a common currency of which it happans to be a part!