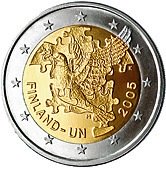 Details relating to the Finnish Commemorative of 2005.

This coin commemorates the 60th anniversary of the founding of the United Nations.

One of the main tasks of the United Nations is the maintenance of world peace and this is reflected in the choice of the motif – a dove of peace with an olive branch in its beak.

This is shown as part of a jigsaw puzzle – if this has any symbolic meaning, I am unaware of it.

Around the edge of the inner circle is the inscription: ”FINLAND – UN 2005”. The mint mark is a short distance in from six o’clock and the mark of the designer “K” is just after two o’clock.