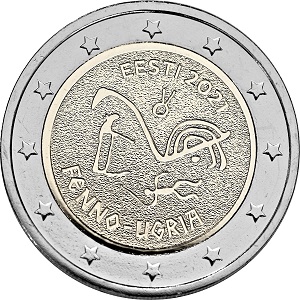 Details relating to the Estonian Commemorative of 2021.

This coin has been minted to honour the Estonian language or rather the Finno-Ugric languages of which Estonian is one - the other main ones being Finnish, Hungarian and the Sami languages of the Lapps.

Europe is dominated by the Indo-Germanic language, followed by the Finno-Ugric languages and with Basque which appears to have no relation to any other European language.

Around 1840, some 1,200 Neolithic petroglyphs were discovered in Estonia,showing the life cycle of the Finno-Ugric people. These show how a swan carries the sun across the sky as well as other themes such as water birds, elk and hunters.

These petroglyphs served as inspiration for the designer of the coin motif.

The coin motif shows the swan as the central motif, it being the main image within the coin's inner circle. Other petroglyphs represent a cow/bull and a person.

Around the edge of the inner circle, eight to five o'clock is the inscription “FENNO-UGRIA” and from eleven to two o'clock we see the issuing country and the year of issue  “EESTI 2021”