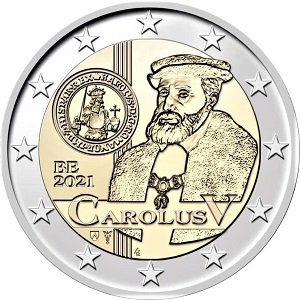 Details relating to the Belgian Commemorative of 2021.

This coin commemorates the 500th Anniversary of the issuing of the first Karlsgulden.

The coin was issued by Charles V who in 1530 was crowned emperor by the pope.

The economy prospered under him and in 1521 he laid the foundation for a new currency which included the golden Karlesgulden.

The motif of the coin shows an image of Charles occupying the right side of the coin's inner circle. The image is based on a painting by Rubens.

An interesting feature of the coin is that within it we have the image of another coin - the golden Karlesdulden. this is to be seen in the upper left quartile.

The motif of "the coin within a coin" shows Charles , then beardless but with long hair, in a suite of armour and carrying his orb and sword.

Around the outer ring (of the inner coin) is the inscription:

"KAROLVS°D:G°ROMANOR°IMP°Z°HISPAR°REX"(Charles by the Grace of God Emperor of the Romans and King of the Spaniards).

In the lower half of the inner ring, running horizontally from eight to four o'clock is the bold inscription "Carolus V".

The designation of the issuing country "BE" and of the year of issue "2021" are shown between eight and nin o'clock.

Four lines run vertically from between elevenand twelve o'clock to between six and seven o'clock.

Finally at seven o'clock is the coat of arms of the municipality of Herzele and themint mark. The designers signet "LL" appears at six o'clock.