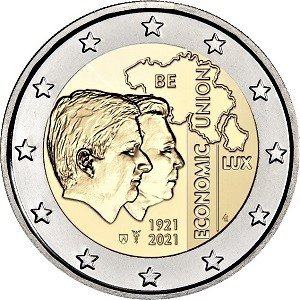 Details relating to the Belgian Commemorative of 2021.

This coin commemorates the 100th anniversary of the treaty on economic union between Belgium and Luxembourg which was signed in Brussels on 24th July 1921.The treaty among other things coupled the Belgian and Luxembourg francs until they were replaced by the Euro in 2002.

The motif of the coin shows the two heads of state -

Grand Duke Henri of Luxembourg (back).

In the top right quarter of the inner circle we see an outline of the two states.

Running up vertically from four o'clock to two o'click is the inscription "ECONOMIC UNION" .

At the bottom of the inner circle are the dates of the signing of the treaty and of the issue of the coin -1921 and 2021.

To the left of the dates we see the mint mark and the coat of arms of the municipality of Herzele. Finally on the edge of the inner circle near four o'clock are the initials of the designer "LL".