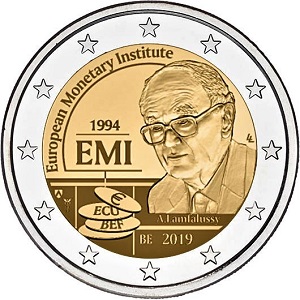 Details relating to the Belgian Commemorative of 2019.

This coin commemorates the 25th anniversary of the establishment of the  European monetary Institute (EMI). The focus of the EMI was establishing the ECB (European Central Bank) as well as the new currency – the Euro.

The motif is complex and interesting – on the left of the inner circle is a portrait of Alexandre Lamfalussy who was elected the first president of the EMI.

The inner circle is divided, by a horizontal line running from a point between eight and nine o’clock, into an upper and lower section.

In the upper section on the edge of the inner circle , running from nine to twelve o’clock, is the inscription “European Monetary Institute”. Within this arc is the year the institute was established 1994 and, boldly displayed the initials EMI.

In the lower section a number of discs are shown, going from BEF (representing the former Belgian currency) and ending with € (the Euro). This symbolizes the change from the old European currencies to the Euro.

On the edge of the inner circle, at eight o’clock is the mint mark of the royal Dutch Mint and immediately above it is the mark of the Belgian mint director.

Finally at the bottom under the portrait is the president’s name “A.Lamfalussy” and thereunder the sign of the issuing country and the year of issue – BE 2019.

All in all a very interesting commemorative.