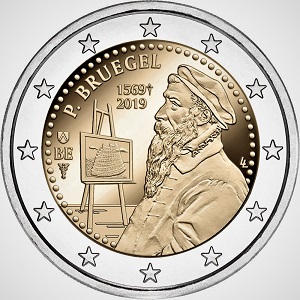 Details relating to the Belgian Commemorative of 2019.

This coin commemorates the 550th Anniversary of the painter Pieter Bruegel the Elder.

Bruegel was famous for his rendering of the life of the peasants in the Brabant Duchy. He was seen as a representative of the Dutch Renaissance.

The motif chosen is that of a copper engraving showing Bruegel in front of an easel which shows his painting of the tower of Babel. The motif fills the entire inner circle of the coin. This renowned painting is now housed in van Beuningen museum in Rotterdam.

A series of dots runs around the edge of the inner circle from seven to four o’clock. Under these dots from ten to twelve is the bold inscription “P.BRUEGEL” and thereunder the year of his death and the year of issue – 1569 and 2019.

Just in from the dots at nine o’clock we have one under the other – the mark of the mint master (an inverted V), the country designation (BE) and the mintmark. Finally, between three and four o’clock is the mark (LL) of the coin designer Luc Luycx.