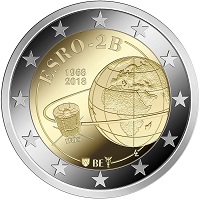 Details relating to the Belgian Commemorative of 2018.

This coin commemorates Belgium’s participation in the development and launching of the European Satellite “ESRO-2B”. The satellite was launched in May 1968, its purpose being to study cosmic radiation. It was unfortunately only functional for a short time and burned up on re-entering the earth’s atmosphere in 1971.

The motif in the inner circle shows the satellite in orbit around the earth. Seen prominently are Africa and Europe and just visible are the eastern edges of Brazil and Greenland.

Around the edge of the outer circle, from ten to one o’clock is a somewhat bold inscription “ESRO-2B”. Thereunder we see the years of the satellite launching and of issuing the coin – “1968 2018”.

At the bottom of the inner circle is the country designation “BE” and to the left and right thereof are, respectively, the sign of the mint master and the mint mark.

Finally at five o’clock are initials “LL” of the designer of the coin Luc Luycx.