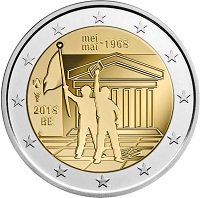 Details relating to the Belgian Commemorative of 2018.

This coin commemorates the student riots of 1968.

The riots/protest of 1968 took place in several countries in Europe as well as in the United States.

Social  issues, particularly against bureaucratic and military elites were the main issues behind the protests. In the United states opposition to the Vietnam war was a major issue. In Belgium, specifically local issues were the focus of the protests – for example French speaking influence at the bilingual University of Leuven. Other issues relating to the country’s Universities were points of contention.

The motif in the inner circle shows students against a background representing a university, holding a flag and leaflet aloft – the latter representing the student demands.

At the top of the coin is the inscription mei/mai 1968 i.e may 1968 in the two official languages French and Flemish. On the edge of the inner circle between eight and nine o’clock are the year of issue and issuing country 2018 and “BE”. Immediately above the year of issue is the mint mark. And above that the sign of the mint master. Finally at eight o’clock are the initials “LL” of the coin designer Luc Luycx.