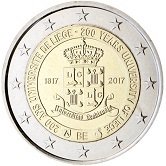 Details relating to the Belgian Commemorative of 2017.

The coin commemorates the 200th anniversary of the founding of the University of Liege.

The university was founded during the reign of King William I of the United Kingdom of the Netherlands.

The inner circle depicts the coat of arms of the University of Liege. The coat of arms shows a crown over a shield on which the iconographic attributes of the saints Laurentius and James are depicted. On the left and right of the coat of arms are the dates 1817 and 2017.

The country designation BE at the bottom is preceded and followed by the mark of the mint master and the mint mark.