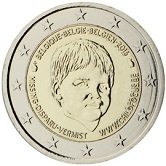 Details relating to the Belgian Commemorative of 2016.

This coin honours the work of the organization Child Focus and was also issued on 25th May, the “Day of missing Children”.

Child Focus is a Belgian organization that offers help and counseling regarding missing or sexually abused children.

The image in the inner circle is of a child, Liam, that vanished without trace in 1996 – the year in which Child Focus was founded.

Around the edge of the inner circle the following appear:

At the top the issuing country in French, Flams and German.

Missing in English, French and German (six to none o’clock).

Finally, the Mint Mark at ten o’clock and the mark of the mint master, a cat, at two o’clock.

Altogether an interesting issue, although dealing with a very sad topic.