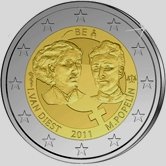 Details relating to the Belgian Commemorative of 2011.

This coin celebrates the 100th anniversary of the creation of the International Women’s Day.

Next to the heads of the women are the symbols of their respective professions – the Rod of Asclepius (nine o’clock) and the Scales of Justice (three o’clock).

The top of the inner circle from left to right are the mark of the mint master, the issuing country amd the mint mark.

In the background is a stylized Venus symbol with the cross at five o’clock.