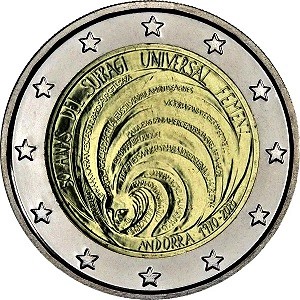 Details relating to the Andorran Commemorative of 2020.

This coin commemorates the 50th anniversary of the right of Andorran women to vote.

Although Andorran men were granted the right to vote in 1933, the right was only granted to women in 1970 after feminist movements in Europe motivated Andorran women to petition for the right to be extended to women. This was finally granted in 1970 and the first election in which women voted followed shortly afterwads in 1971.

The motif of the coin shows the face of a woman,towards the bottom of the coin around seven o'clock. Emanating from her head are a number of arched lines - looking somewhat like hairs. On each arc are various Catalan first names.

This, I think, is to symbolise the solidarity of the women fighting for their right to vote.

Around the edge of the inner circle from between eight and nine o'clock to two o'clock is thr inscription in Catalan "50 ANYS DEL SUFRAGI UNIVERSAL FEMENÍ" (50 years of universal women's suffrage).

Around the bottom of the inner circle from six to four o'clock we see the issuing country as well as the date of the granting of the vote to women and the year of issue - “ANDORRA 1970-2020”.