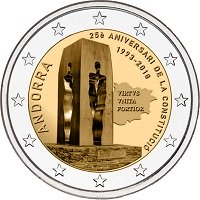 Details relating to the Andorran Commemorative of 2017.

The coin celebrates the 25th Anniversary of the establishment of the constitution of Andorra.

The motif of the coin shows the Monument to the Men and Women of Andorra who launched the Constitution. The monument was erected in 1993 in the square of the Parliament in Andorra la Vella.

The monument shows the silhouettes (represented by hollow shapes carved into the monument) of a man and a woman. They stand for the desire expressed by Andorrans in the 1933 elections to become a constitutional, democratic state.

To the right of the monument is the a map of Andorra together with an inscription in Latin “VIRTVS VNITA FORTIOR” (United virtue is stronger). This is written in the old format where “V” represented  ”U” – nowadays it would normally be written “VITUS UNITA FORTIOR”. This is by the way the motto of Andorra.

Around the edge of the inner circle are various inscriptions. From eight to ten o’clock “ANDORRA” and from twelve to five o’clock “25è ANIVERSARI DE LA CONSTITUCIÓ” (25th Anniversary of the Constitution). Inside the last inscription we see the years 1993-2018.