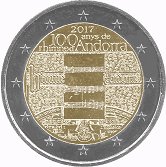 Details relating to the Andorran Commemorative of 2017.

This coin celebrates the 100th anniversary of the composing of the Andorran National Anthem.

The National Anthem is known as “El Gran Carlemany “(The Great Charlemagne).

The first few lines of the Anthem are "The great Charlemagne, my father, freed me from the Arabs, and from heaven he gave me the life of Meritxel, the great mother, I was born a princess, a virgin, neutral between two nations the only surviving daughter of the Carolingian Empire." It was published in 1914 and declared the national anthem on 2 April 1917.

At the top is a segment in which the year of issue – 2017 is shown and thereunder the inscription ‘100 anys de l’himne d’Andorra’ (100 years of the anthem of Andorra).

In an arc running from eight to four o’clock is the inscription: "por: unison i acompanyament" (For choir and accompaniment).Thereunder,in the bottom segment somewhat difficult to read, on the left "Letra del: ... lloch i Vivó" (text by ... lloch i Vivó) and on the right "Música ... E ..." (Music ... E ...).

Note: Although only issued in February 2018, this is in fact an Andorran Commemorative of 2017.