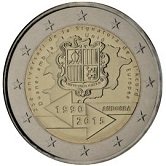 Details relating to the Andorran Commemorative of 2015.

As Andorra is not a member of the EU, a custom’s union with the EU is required to enable goods to pass from the EU to Andorra and from Andorra to the EU without any custom’s duty falling due.

The motif of the coin is a map of Andorra together with the Andorran coat of arms within the map. Underneath the map are two arrows, interlocked and pointing in opposite directions – symbolizing the flow of goods between Andorra and the EU.

Around the edge of the inner circle, in two lines, is the inscription “25 è aniversari de la Signatura de l’Acord Duaner amb la Unió Europea” (  25th Anniversary of the Signature of the Customs Agreement with the European Union).